This morning on the train I annoyed a commuter. I didn’t mean to, and I suspect his day had already started badly by the time he encountered me, but I annoyed him all the same. He was around sixty and wearing a mask, since the hay fever season has started. I am fortunate to not have to face the daily crushed commute, but when I do get on a rush hour train I like to listen to music to block out everything else. Armed with my trusty iPod I squeezed onto the train and turned on some music. He immediately fixed me with an icy stare and I quickly hit stop. He looked away, so I pressed play and his eyes swivelled back to me. Music off again, he looked away. I started to listen again, and this time waited a few seconds. He fixed me with a venomous, beady-eyed stare, he was definitely annoyed with me. I turned the music off and could hear him muttering, ‘urusai’, ‘noisy’ and not wishing to incur any more wrath I stood in silence for the rest of the journey.

Now, I didn’t take out the ear buds, I was not going to surrender so easily, but as I stood music-less in the great crush of people, and looked at all the other commuters happily plugged into their smart phones and iPods I wondered what I had done to upset him so.  Maybe I was the closest noisy person. Maybe I was more easily separated from the crowd because I’m not Japanese. Maybe he had bad hay fever this morning. Maybe he hates his job. Maybe he didn’t enjoy his weekend. Maybe he doesn’t like Monday mornings. I hope I didn’t spoil his whole day.

Living in Japan it’s easy to forget how to roll with the more feisty approach to interaction I encounter in Europe. Here we are aiming for wa, harmony, and the education system inculcates this subjugation of the individual to the group. Students learn to work together, in club activities, for sports days and culture festivals. The individual who, for example, asserts his right to be hissy on a crowded train is not playing by the rules. His safety catch was off and I didn’t know what he might do next.

Standing there wondering what on earth could be going on, listing all the possible stressors, I realised that there is a tiredness in the air. We have had a cold winter and we’re ready for spring. The plum blossoms are blooming, so are the early cherry blossoms, but it’s still cold. For students and teachers it’s almost the end of the school year, bringing tests and grading with it. Tree pollen is already in the air, starting with the most dreaded of all, Japanese cedar, planted widely after the war to counter deforestation and now widely responsible for the itchy misery of millions.

Most of all, tomorrow is March 11th. The 3rd anniversary of the Great East Japan Earthquake, the M9 earthquake and the monster tsunami that devastated Tohoku.  I wrote about this last year, and it is frustrating to write that there are still 267,000 people living in temporary housing.

While we all say we have not forgotten about Tohoku, we (collectively) seem remarkably able to live with this fact and more. Of course, we don’t live with the reality. The people of Tohoku do that. On the Japan Times website there is this heartbreaking article about the children of Fukushima, unable to play outside:

and this one, about junior high school students:

So how did I get from an irritated commuter to this? I have been thinking today about a quote from the writing of Lu Xun, a Chinese writer I studied at university. I have been trying to track down the piece where the quote occurs, but so far I’ve had no luck. I think it’s somewhere in Wild Grass or A Call to Arms.

‘My heart is extraordinarily lonely.’

Are we taking care of each other? Do we see individuals in a crowd? Do we really listen to each other, really connect with each other? I am glad I annoyed my fellow commuter this morning, because it made me stand in silence and wonder about what was going on for him. Deprived of my music, the bubble I usually choose to put myself in I stood there and made a list in my head of what could possibly be upsetting him. How often do I do that? Squashed in the middle of the carriage I found myself in fact in a space to think, and it was such a gift.

There is plenty of news in Japan to distract us from the ongoing challenges in Tohoku; the economy, a right-wing government rattling its sabres at South Korea and China over territorial disputes, various members of NHK’s board of governors making outrageous revisionist statements about Japan’s recent history. We can be squashed into a crowded news cycle and not remember what life is like for the people whose lives changed on March 11th, 2011.

We need to make space, for ourselves and other people, even in a vast crowded city like Tokyo. We need to be gentle with each other every day, but as the clock ticks towards midnight and we get ready to mark another anniversary, we need to remember ourselves, three years ago. This evening the lights on Tokyo Tower have been spelling out ‘kizuna’ (絆), chosen as the kanji of the year in 2011 and meaning ‘bonds’. Three years ago there was a feeling that we were all together in the days following the earthquake. One of the most common questions we asked each other was, ‘Were you with other people?’, because I think we recognised that being alone made everything much harder to bear.

‘My heart is extraordinarily lonely.’ Is that how the people of Tohoku feel?

I love living in Tokyo, and after the heat of the summer I always look forward to the chill in the air as autumn arrives, to crisp days of blue skies and bright sunshine, to the vivid yellow ginkgo leaves and the flaming red maples.

But there is also something heavy in my heart, I suppose it’s the end of the year and I’m running on empty, but there’s still lots to do. It’s the season of 年末年始 or ‘nen matsu nen shi’, the end of one year and the beginning of the next.

It’s time to buy New Year cards and the special stamps to stick on them, to check with the people you usually send cards whether they have been bereaved this year, in which case, no card for them. It would be inappropriate to send them a ‘Happy New year’ greeting. If you have been bereaved in the past year, the onus is actually on you to send out a different kind of card to pre-empt the sending of New Year cards, reminding or informing people that you are in mourning and therefore not sending or receiving cards this year. I have found that people often just mention it in passing instead of sending the cards, but if you do send the cards then there are special postage stamps for them, too. I have bought my New Year cards, I have bought the special stamps (2014 being the year of the horse, so the stamps have little cartoon horses on them), and I have asked around to see who should not receive a card, so I’m all ready, I just have to write them all now.

It’s also the bonenkai season (忘年会), time for a year-end party at work or with friends. Sometimes in English these social occasions get called Christmas party or dinner, but it’s dinner and/or drinks with friends, it’s the end of the year, it’s a bonenkai. Of course, this also means that there will be more passengers on the evening trains who have been drinking, and so there is a poster in Metro stations:

‘Ah! Dangerous! Take care on days when you have drunk too much alcohol,’ the poster warns. While it also mentions that walking and texting is dangerous, it helpfully informs us that 63.5% of people who fall off the platform have been drinking. This goofy poster is apparently part of a drive to have no ‘platform incidents’.

Christmas is all over Tokyo. Well, Christmas trees, various assorted Santas and reindeer, and adverts for large buckets of chicken followed by strawberry shortcake, the perfect Christmas dinner, brought to you by KFC and 7-eleven. Really. This photo was taken at Tokyo Tower, you can just see the bottom of one of the legs. Think Eiffel Tower, painted red and white. There is an enormous Christmas tree under the tower, and a kind of winding maze of plastic illuminated reindeer, and when I walked past a couple of weeks ago there were a lot of high school girls wandering amongst the reindeer. An instant bucolic idyll, 21st-century Tokyo-style.  Just across the road was this display, angels heralding an office building. 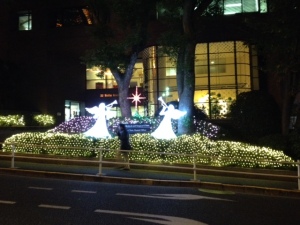 There are Christmas carols everywhere; my local shopping street has been playing them over the loudspeaker system for a while now. It’s rather odd, and always reminds me of The Prisoner, I feel I am being forced into Christmas early, and all the cutesy, jingly versions of songs and carols are quite surreal. Equally surreal will be the speed with which it all vanishes by December 26th to be replaced by New Year decorations.

So boo, it’s almost the end of the year, and there is still so much to do. Time to finish up the term at school, get all the paperwork finished. Time to do Christmas shopping and write cards (and then New Year cards). Time to pack a suitcase and head back to the UK for a fortnight. So much to do before that. It’s enough to make you feel so exhausted you might fall asleep on someone on the train . . . but that would be inconsiderate, so the latest manner poster addresses it:

I do love living in Tokyo. In late autumn and winter the days are usually bright and sunny. I can see Mount Fuji from the train and I’m surrounded by the vibrant colours of Mother Nature’s last hurrah before she hunkers down to wait for spring. It’s good to spend time with friends celebrating the end of another year, it’s good to look forward to travelling. I just wish I had maybe a week or two more and a bit more energy.

Walking through Shibuya station yesterday evening I saw a Buddhist monk standing in the midst of all the commuters. People were rushing about, and in the middle of it all he stood praying and waiting for alms. Just standing there while rush hour carried on around him. Part of Shibuya station is pretty much a construction site at the moment, so there’s the added chaos that brings. He was just standing there, doing his thing, and I thought again, I do love Tokyo.