Last year I came to St. Michael’s on retreat for what I thought would be the last time. The Sisters were planning to move and the convent would be closed at the end of the summer. With a heavy heart I said goodbye to the house, the chapel and the garden. But in the spring an e-mail arrived; the move was taking longer than expected, and the convent would be open until the end of July. I had one more chance to visit.

It’s a funny feeling, coming back to a place you thought you had said goodbye to. I hadn’t realised it would feel as liberating as it did. I made my farewells last summer, I picked up pebbles and took a zillion photos, sat on my favorite bench and told myself over and over, this is the last time I’ll ever . . .

But I am back, and I have felt liberated from my usual rhythm. Instead of staying within the convent grounds for my whole stay, I have walked down to the Thames and along its banks. Instead of staying in silence I have had conversations. Instead of Spending most of the time alone I have spent time with others. What a gift it has all been.

I arrived yesterday in time for the midday Eucharist. The Gospel reading was the Parable of the Sower. During the intercessions, the Sister prayed that we would all have good soil. The idea, the image settled in my mind and has kept surfacing. 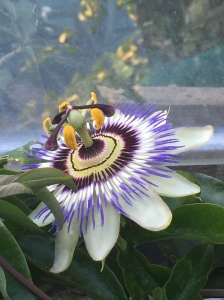 One of the most wonderful things about this place is its garden. There are two orchards, a vast lawn, a kitchen garden and other woody areas. Over the decades they have been here, the Sisters have cared for the fruit trees, planted borders and established a kitchen garden. Clearly, this is good soil. It produces fruit and vegetables for the convent table. There are borders of lavender, huge bushes of rosemary, towering fig trees; it is all nurtured with love, patience and green fingers and consumed with gratitude. 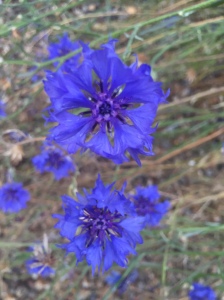 Of course, this is not just a place to stay for a quiet break; it is a convent, and to stay here is to enter into the life and rhythm of the community. Joining the  Sisters in the Daily Office, sitting with them in silence, is to experience something simple and yet precious and profound. When you step away from the ordinary busy-ness of everyday life it is amazing what grows in the good soil of silence.

This afternoon I spent a couple of hours with a friend, H. Over the years we have happened to be at the convent at the same time, and gradually shared snippets of information over the meals that were not in silence. Last year we became Facebook friends. When I found my place in the chapel yesterday I noticed the name on the chair next to mine, and wondered, could she be here as well? She was, and we decided to go for a walk this afternoon.

So we met at the mulberry tree in the garden at 4pm, went for a walk through Richmond Park and shared a pot of tea at a nursery. We walked back along the Thames and joined the Sisters for the evening Eucharist. After supper we ended up in the garden with one of the Sisters; first, we went to the kitchen garden so H could pick up some cuttings she had left there. Then it was down into the old orchard in search of a small stone cat I had seen every year. Neither the Sister nor H had ever seen it before, which produced in me an irrational fear that it would no longer be there and I would seem a bit loopy. But it was, much to the Sister’s amazement. It was duly rescued from the undergrowth and transported to the top of the garden, from where it will be moved eventually to their new home. Finally we arrived at the old mulberry tree and finding some berries ripe we helped ourselves to a few. It was only later that I realised we had gone ’round and round the mulberry bush’ in search of ripe berries. The faithful old tree has been propped up for years, still producing fruit from the good soil.

While we were walking this afternoon, H asked me how I was feeling about the convent moving, and how I coped with loss. The time I have spent here this year has felt like a bonus. I already said my goodbyes last year, and made my peace with not being able to come here again. That reprieve gave me a chance to come here and spend the time a little differently. I shall miss this place; the chapel and the garden especially. But this visit has shown me also that so much that has made this place special is portable.

The Sisters will make a new home in another place, and in a year or two they will be ready to welcome visitors again. There will be another garden, another chapel, but the same Sisters, the same community, the same rhythms of worship. Just as the atmosphere here has opened our hearts to worship and to one another, just as the community has found good soil here for decades, so they will find more good soil in their new home.

I arrived and will leave here with great gratitude. The good soil I have found here has grown silence and prayer inside me. It has fed me with mulberries and beetroot, damsons, tomatoes and apples. I have had conversations that have grown my faith. I have been blessed with friendships and a feeling of connectedness that I will carry with me when I leave. Good soil, indeed.