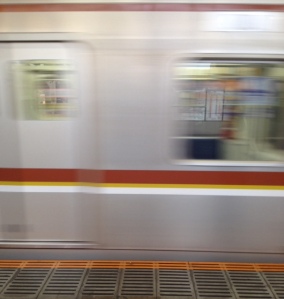 Mr. T is homeless. I first met him about six months ago, and since I usually see him about once a week I have got to know him a little. Thinking about American people all over the world getting ready to celebrate Thanksgiving, I thought I would introduce Mr. T to you and tell you a little about how he lives. Getting to know him and talking to him has made me thankful for the comforts and security I have.

I don’t know how long he’s been homeless, but it’s over ten years. I’d say he was in his fifties, but I’ve never asked his age. He often spends the day sitting in church (where I met him), listening to a small radio with earphones. Recently he’s been listening to the sumo tournament.

Several years ago I used to help out at another church in the diocese one Saturday a month, when there was a group who made food for homeless people in Shibuya. We used to spend several hours making pork soup and rice balls, or curry rice, and later in the evening another group took the meals to Shibuya Ward Office where a lot of homeless people slept. Several things have stayed with me since then; the care that was taken to cook a nutritious meal; the way we changed the menu according to the requests that were fed back to us, and the loving way everything was done. One of the group members told me that if a homeless person came to the church during the week, someone would cook a bowl of noodles and sit with him or her while they ate, to share some time together.

It was that last point that came back to me when I first met Mr. T, and his friend Mr. M. They were both in church, sitting quietly. We talked for a while, and it was then that I heard that Mr. T is from Hokkaido, and has no living relatives. Mr. M was from Chiba, and had a family, but never went back there. They told me that they’d been sticking together for over ten years, and that they slept in the entrance to a bank. In the winter they have sleeping bags to protect them from the elements, and in summer they have trouble with ants.

Mr. T seems to know all the places around Tokyo where he can get food, but to get to any of these places he has to walk. Depending on the day of the week there is food available at different locations, and Mr. T told me this evening that on Sundays there is a church which provides a meal. (It is common practice for Japanese Anglican churches to cook a meal after the service and for everyone to eat together, and it is this meal that Mr. T shares.) He also knows where he can go to be warm, so in addition to our church he often goes to a library, which has some kind of seating area downstairs where he can stay until it closes in the evening.

Last week I saw Mr. T for the first time in several weeks. He hadn’t been around and I was wondering where he and Mr. M were. In some distress he told me that he hadn’t seen Mr. M for over a month. They had often gone their separate ways during the day, but one evening Mr. M didn’t return to the bank entrance. Over the course of the month since then, Mr. T had gone in search of his friend; to the hospital which cares for homeless people; to the places where they had been together to receive food; to the park where Mr. M’s friend lives in a blue tarpaulin tent. Mr. M had spent a week over there once, helping his friend collect aluminium cans, crushing them and taking them somewhere to get money for the scrap metal. He tracked down the friend but no one had seen Mr. M.

Mr. T is desperately worried for his friend. He was worried that he had been involved in some kind of traffic accident, or that someone had beaten him up, but as time has gone on he has changed his mind. I had noticed that Mr. M had trouble walking, and Mr. T told me that he had a lot of sores on his legs, and he’s worried that his friend got some kind of infection. He used to put band-aids on his legs when he could, but if he couldn’t get any he used to use sticky tape. Mr. T is still waiting for his friend to come back, and that is how he reports the situation when he sees me: ‘He hasn’t come back yet.’

It is upsetting to listen to his distress, to his loneliness, and his feelings of despair that he has been unable to find and help his friend. Mr. M never seems far from his thoughts, and he often mentions him. A decade-plus friendship is a long one at any time, in any place, but on the street they have been each other’s support for so long, and now Mr. M is not there.

Life often whizzes by, there is so much we don’t see or don’t want to see every day. Getting to know Mr. T, to call him my friend, I have heard about how people live on the streets. It’s not easy to live with the information, and it makes me wonder at the resilience of the human body and spirit. So this Thanksgiving, although I’m not American, I shall appropriate it for my own. I am so very thankful to have a roof over my head, enough food to eat, enough money in the bank, for all the security that brings. Thankful too for all my friends, but I send up extra prayers for Mr. T and Mr. M, that Mr. M will find his way back and they can support each other again as they have done for years.