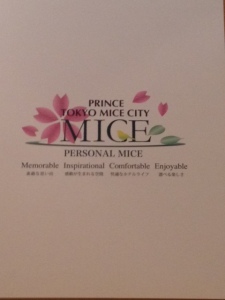 Japanese English has been a source of amusement for a very long time; I remember watching Clive James on British television in the 80s filling programmes with ill-advised product names or the sight of Japanese people competing in extreme and bizarre game shows. At the time Japan seemed a distant and completely alien land.

Now that I’ve lived here for over twenty years, I still see the silly stuff, the Collon chocolate, Pocari Sweat (sports drink), the reversed ‘l’s and ‘r’s, I still pull out my iPhone and take photos of particularly funny examples. I joke about it and say that I’m glad to see there’s a long way to go before English teachers are obsolete, but sometimes I don’t find it so funny. In the 21st century, when we can access information from all over the world within seconds, when people travel so much and cultures are intermingled so much more than in the past, I wonder about the magpie-like appropriation of any word or image that seems cool, and what the impact of that can be. I know that Japan is not alone in this; other countries in Asia do the same and it’s not hard to find websites dedicated to cataloguing it all. In the past week I have been thinking about the appropriation of strong words (specifically f***) and images that are sacred to one religion but an apparent accessory to other people.

Last year, I was looking online for Hello Kitty goods to send to a friend’s daughter, and a search took me to Japanese Amazon, where among all the kitchen utensils and other goods for the home I came across this, the Hello Kitty crucifix: 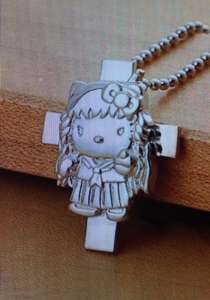 It was being marketed as a Hello Kitty ‘with a playful pose, in a sailor suit’. There was ‘plain type’ and ‘cross type’. It was expensive; ¥15,000, or about £100. I put it on Facebook at the time, finding it ridiculous in some kind of awful, eye-rolling, whatever-will-they-think-of-next kind of way. Last week I mentioned it to someone who wasn’t in Japan then, and I posted it again, and someone else saw it and called Sanrio (the company who markets Hello Kitty) and explained to them the power of the image they had appropriated. It turned out that the image had been licensed to another company, which had in turn commissioned a designer and these pieces were part of the resulting collection, though the cross was not part of the original agreement. Once they understood the juxtaposition of images and how some people may feel, Sanrio decided to ask for the item to be removed. They didn’t want Hello Kitty’s image to be tarnished.

It reminded me of a conversation a friend overheard in Yokohama some years ago. A young Japanese woman was choosing an accessory at a street stall, and the vendor asked her if she would like the cross ‘with or without the little man’. It’s funny, but it’s also toe-curlingly crass, depending on your point of view. I certainly don’t want to become one of those people Richard Dawkins loves to hold up for ridicule, but I do think that we should respect each other’s sacred images. The same goes for images of monarchy, which many people admire or revere, and, to some extent, national flags. It is not always the case that Japan treats its own sacred images in a way that implies respect. A trip to Kamakura will provide many opportunities to buy sweet bean paste-filled buns shaped like the Big Buddha, and even a kind of Buddha-shaped candy on a stick. I find these items slightly disturbing, but they seem popular with visitors to the area.

As well as the appropriation of sacred images, there has long been a casual use of so-called taboo words. At its mildest, it is the throwing about of ‘Oh my God!’, which even junior high school students will use. They copy it from TV comedians. At its strongest, it is merchandise with f*** all over it. At the school I used to work at I once saw a badge on a student’s pencil case with ‘f*** you’ on it (Hello Kitty again), and recently I have seen these two examples, both in Harajuku: 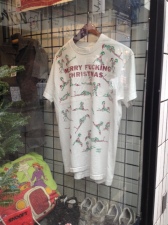 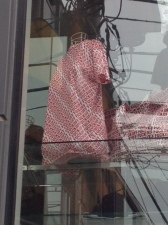 At first sight they probably seem comical, but are they? In Tokyo they may seem cool, but how would you feel if you were sitting next to someone on a train or a plane and they were wearing the shirt on the right? Are you sure you’d feel completely OK? Might you want to check if they understand what they’re broadcasting to the world?

Maybe I seem a bit squeaky, up on my hand legs yapping about something that a lot of people are not offended by in the least. Someone made the same point to me today, that f*** has become just another modifier, no different from ‘very’. I disagree with this, because in my experience people use the word with people they know. No one walks into a shop and uses that kind of language with the people working there. It’s not used in the media as just another word. It has power, and if it’s not used between people who know each other well, it’s fighting talk. It’s aggressive.

In 1992, a 16-year-old Japanese high school student called Yoshihiro Hattori went on an exchange trip to Baton Rouge, Louisiana. While he was there it was Hallowe’en, and with his homestay brother he dressed up in a costume and went to a party. Unfortunately they went to the wrong house, and the owner, spooked by strangers at his door, confronted the two teenagers with a gun, and shouted ‘freeze’. While his homestay brother understood, Hattori did not, and stepped forward, only to be shot at point-blank range and killed. There were two trials, one criminal and one civil, and the man who had shot him, Mr. Peairs was acquitted of the criminal charge but found liable in the civil trial. Since then, Mr. and Mrs. Hattori have campaigned for gun control and established a charity to enable American students to visit Japan.

I remember at the time, a lot of the Japanese people I worked with expressed shock at so much of what had happened; the use of a gun when all someone had done was knock on the wrong door; the acquittal of the man who had shot Hattori, and also, ‘Did you know what “freeze” meant?’ It seemed no-one did until this incident. He didn’t understand one word, stepped forward, and was shot. Under the law, Mr. Peairs was within his rights, but a high school student lost his life because he didn’t understand that one word.

So, is it important that a Japanese person who wants to wear an item of clothing with f*** on it understand the weight and power of that word? I think it is. If they understand it and still wear it, all fine and dandy. If anyone takes issue with them they’ll know why and will have worn it knowingly. The trouble is, I don’t think they do. It’s cool, it’s English, they vaguely know it’s not a good word, but I think that’s as far as it goes. All it takes is a misunderstanding over one word. It might start a fight, it might simply cause offence, it might spoil a vacation or create unfortunate stereotypes on both sides. Is it worth it? 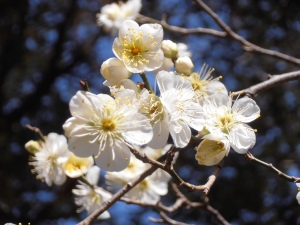 I have been away from my blog too long. I have been missing writing but it’s almost the end of the school year so marking and testing have been taking up my time and energy. This is no excuse, but it will be a lesson to me to be sure to carve out time to write even when I have lots of other things to do. I’m reluctant to actually say I have been busy, since for many years I had a wise friend called Anthony Perry, actually my spiritual director, who took issue with me throwing that out as an excuse. His feeling was that it was better to be grateful for all the things in my life, and to say I was busy sounded ungrateful, especially as I had created this level of activity for myself. So, point taken, and a wise friend much missed. And really, although there has been a lot going on at school, I have also been doing a lot that has been wonderful.

Last Friday there was a warm wind in the air; haruichiban (春一番), the first strong southerly wind of spring or, as my dictionary has it, ‘the first gale of spring’. It didn’t feel like a gale, but the wind was quite strong and slightly balmy. Today the sky is blue, it’s becoming warmer and the plum blossom is in full bloom. No cherry blossoms yet, we still have to wait a few weeks but the buds are swelling on the trees. Walking home from the station I pass several plum trees and the fragrance is beautiful. When I first lived in Japan I found the cherry blossoms a bit much, so much pink froth everywhere you looked, but the plum blossoms were always lovely.

Unfortunately, with the blossom season comes hay fever (花粉症), not strictly hay fever since this is allergies to tree pollen, and the biggest culprit is sugi (杉) or Japanese cedar. It’s Japan’s national tree, but is not kind to a great number of Japanese (and other) people who suffer from an allergy to its pollen every year. Surgical masks are a common sight at any time of the year; commuters often wear them to protect themselves from germs on the way to work or school, or to protect others from the germs of the mask-wearer, but in spring there are a great many more, as people try to protect themselves from tree pollen. After sugi will come hinoki (檜) or cypress, which affects me slightly, but I am fortunate to not suffer from sugi allergy. A good friend who does suffer reminded me a few weeks ago that my joy at the approaching spring was not shared by anyone bracing themselves for the clouds of pollen soon to be heading their way.

Anyway, allergy-free, and with the end of the school year in sight, I have been enjoying the blossoms and the sunshine. Almost a fortnight ago I spent a glorious day in Kamakura with a dear friend, who was visiting Tokyo for a few days. We visited four shrines and temples; Hōkoku-ji (報国寺), famous for its bamboo forest: 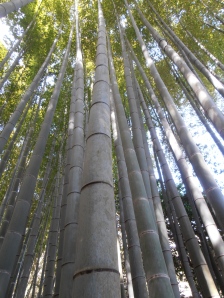 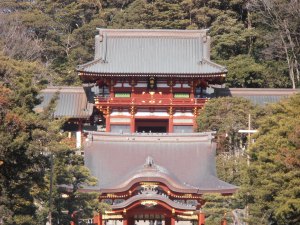 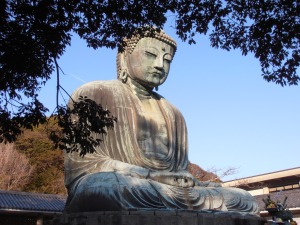 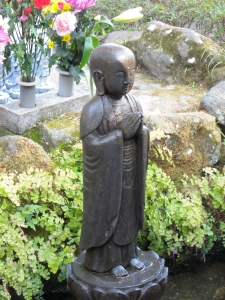 Sometimes I get so caught up in work, in getting everything done, I forget to go outside, to revisit places I love. This day in Kamakura was just what I needed; beautiful weather, inspiring, peaceful places and wonderful company. Maybe it’s human nature to hunker down in winter, to hibernate a bit, and if there’s lots to do at work it’s easy to focus on that. But two weeks ago I had a fantastic day, I came home tired but happy and felt that like the blossoms, I, too, was waking up to spring. 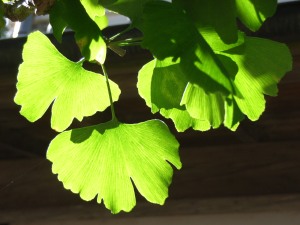 I love the way the sunlight filters through the leaves.

Error: Twitter did not respond. Please wait a few minutes and refresh this page.