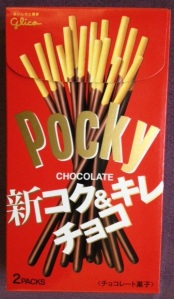 To the rest of the world today is Remembrance Sunday or Veterans Day. I work in a girls’ school in Tokyo so I also know that to some it’s Pocky Day, since the date resembles sticks of Pocky (1111). If you have lived in Japan you are probably familiar with Pocky, the thin biscuit sticks covered with chocolate. Apparently it was first sold in 1966, and since then has been produced in a wide variety of flavours, some regional, some seasonal. At any time I think you can walk into a convenience store or supermarket and pick up half a dozen different varieties. To test my theory I went to my local Familymart yesterday and found seven, but only bought six because one looked unappealing.

Of course, the one available everywhere and all year round is the red box of Pocky at the top of this post. (I know it’s a bit wonky but I wanted to take my own photo and the shiny box made it a bit of a challenge.) The others readily available which I bought were Thin Pocky, Strawberry Pocky, Chocolate Bran Pocky, Winter Pocky and Almond Crush Pocky. The one I didn’t buy was Double Berry Pocky, and this one plus the Strawberry Pocky are extra appealing (I assume) because the stick is not a simple thin baton but heart-shaped, and on the box they are called ‘heartful’. I have seen cucumbers similarly shaped (cucumbers!) so clearly this makes for a Cuter Snack Experience. A few more heart-shaped stick food items and we’ll be able to call it a boom.

Pocky is apparently so-named because of the onomatopoeic ‘pokkin’ (ポッキン) which is the sound it makes when you bite it. Japanese has a great many of these words, probably topics for future posts, but for today I’ll stick with just this one. In the UK Pocky is marketed as Mikado, since Pocky is for some unfathomable reason not an acceptable name. When I first saw the adverts for Mikado in the UK I assumed it was a Pocky-imitator, and I was surprised to find out it is actually the real thing. I remember finding the advert ridiculous, with a young ‘office lady’ clambering on top of a photocopier to reach the forbidden snack and somehow setting off the machine to take unfortunate photos; I can’t imagine why anyone thought that was a good idea. And the name! Mikado. Because nothing quite says 21st-century deliciousness like . . . a 19th-century Gilbert & Sullivan comic opera.

Pocky is not the only stick-shaped fun you can find in a Japanese convenience store. Pretz is a savoury snack made by the same company (Glico) while Fran is a Pocky-imitator. Pocky itself is available in regular, mousse (thicker chocolate) and decorer (decorated, so even thicker) versions. I’ve never tried the jumbo sized ones, they have the appearance of giant breadsticks and the chocolate-to-biscuit ratio doesn’t look so promising. My personal favourites would be Coconut Pocky in summer, and Winter Pocky in (obviously) winter.

So, having done my research and written this post, I am left with 6 boxes of Pocky. If you’re in Japan you can easily take yourself off to your nearest convenience store and buy some, but if you’re not in Japan – would you like a box?