I see with some consternation that the last time I wrote a post was this time last year.

I have been reflecting over the last month about the last year, and have come to see it as the second half of a two-year period of lots of upheavals and changes. There have also been quite a lot of articles about the end of the decade, the awkward teenage years of this century.

In 2019 I left Japan, after twenty-seven years. I returned to the UK, and went back to college. I am no longer a teacher, but an ordinand training at the College of the Resurrection in West Yorkshire. Rather hilariously though, I am squeaking this post out in the remaining minutes of the year in . . . Tokyo. I am back for a short visit, because although I don’t miss living here, and I certainly don’t miss teaching, I do miss friends. So here I am, catching up with friends and eating as much sushi as I can, stocking up on yuzu kosho (柚子胡椒) and laundry bags with zips and enjoying an extra ninety minutes of daylight every day compared to the UK.

I have seen friends posting photos on social media of themselves ten years ago and now. I suppose it’s an end-of-a-decade thing. And quite a decade it’s been. 2011 was the year of the earthquake and tsunami, when I started sending long e-mails to family and friends, which led to me starting this blog. The decade has taken both my parents and left me a middle-aged orphan. The last five years have been a radical re-orientation of my life; a discernment of a call to ordained ministry and the long process of preparation, selection and finally beginning training. My life is a very different shape to what it was ten years ago.

I shall not be sorry to see the back of 2019. It has been a year of so much change, and I am exhausted. I think I wrote something similar last year, so don’t want to sound like I’m wishing my life away. I hope that now that I have moved back to the UK, that I am training at college, that I am done with swerves and speed bumps . . . but I suppose life isn’t really like that.

New Year’s resolutions: to blog more. Really. I want to write about everything from discernment to training over on my other blog, and I still have to write about grief and leaving Japan and being back in the UK and so many other things. I don’t know if people still read blogs; there is so much out there, who has the time to read even a fraction of what they want to? But I know that I enjoy writing, and so I shall do it anyway. I am going to read more, and not only the books I need for my studies.

Tomorrow I am starting the new year with Mass at the Anglican cathedral in Tokyo. In the afternoon I am going to do a Seven Lucky Gods walk with friends (and another one a few days later). Somehow by January 17th I’m going to produce three essays.

Off you go, 2019. Off you go, awkward teenage years of the twenty-first century. Time for a new year, and a new decade. Life is good. May 2020 be a good year for everyone.

I love living in Tokyo, and after the heat of the summer I always look forward to the chill in the air as autumn arrives, to crisp days of blue skies and bright sunshine, to the vivid yellow ginkgo leaves and the flaming red maples.

But there is also something heavy in my heart, I suppose it’s the end of the year and I’m running on empty, but there’s still lots to do. It’s the season of 年末年始 or ‘nen matsu nen shi’, the end of one year and the beginning of the next.

It’s time to buy New Year cards and the special stamps to stick on them, to check with the people you usually send cards whether they have been bereaved this year, in which case, no card for them. It would be inappropriate to send them a ‘Happy New year’ greeting. If you have been bereaved in the past year, the onus is actually on you to send out a different kind of card to pre-empt the sending of New Year cards, reminding or informing people that you are in mourning and therefore not sending or receiving cards this year. I have found that people often just mention it in passing instead of sending the cards, but if you do send the cards then there are special postage stamps for them, too. I have bought my New Year cards, I have bought the special stamps (2014 being the year of the horse, so the stamps have little cartoon horses on them), and I have asked around to see who should not receive a card, so I’m all ready, I just have to write them all now.

It’s also the bonenkai season (忘年会), time for a year-end party at work or with friends. Sometimes in English these social occasions get called Christmas party or dinner, but it’s dinner and/or drinks with friends, it’s the end of the year, it’s a bonenkai. Of course, this also means that there will be more passengers on the evening trains who have been drinking, and so there is a poster in Metro stations:

‘Ah! Dangerous! Take care on days when you have drunk too much alcohol,’ the poster warns. While it also mentions that walking and texting is dangerous, it helpfully informs us that 63.5% of people who fall off the platform have been drinking. This goofy poster is apparently part of a drive to have no ‘platform incidents’.

Christmas is all over Tokyo. Well, Christmas trees, various assorted Santas and reindeer, and adverts for large buckets of chicken followed by strawberry shortcake, the perfect Christmas dinner, brought to you by KFC and 7-eleven. Really. This photo was taken at Tokyo Tower, you can just see the bottom of one of the legs. Think Eiffel Tower, painted red and white. There is an enormous Christmas tree under the tower, and a kind of winding maze of plastic illuminated reindeer, and when I walked past a couple of weeks ago there were a lot of high school girls wandering amongst the reindeer. An instant bucolic idyll, 21st-century Tokyo-style.  Just across the road was this display, angels heralding an office building.

There are Christmas carols everywhere; my local shopping street has been playing them over the loudspeaker system for a while now. It’s rather odd, and always reminds me of The Prisoner, I feel I am being forced into Christmas early, and all the cutesy, jingly versions of songs and carols are quite surreal. Equally surreal will be the speed with which it all vanishes by December 26th to be replaced by New Year decorations.

So boo, it’s almost the end of the year, and there is still so much to do. Time to finish up the term at school, get all the paperwork finished. Time to do Christmas shopping and write cards (and then New Year cards). Time to pack a suitcase and head back to the UK for a fortnight. So much to do before that. It’s enough to make you feel so exhausted you might fall asleep on someone on the train . . . but that would be inconsiderate, so the latest manner poster addresses it:

I do love living in Tokyo. In late autumn and winter the days are usually bright and sunny. I can see Mount Fuji from the train and I’m surrounded by the vibrant colours of Mother Nature’s last hurrah before she hunkers down to wait for spring. It’s good to spend time with friends celebrating the end of another year, it’s good to look forward to travelling. I just wish I had maybe a week or two more and a bit more energy.

Walking through Shibuya station yesterday evening I saw a Buddhist monk standing in the midst of all the commuters. People were rushing about, and in the middle of it all he stood praying and waiting for alms. Just standing there while rush hour carried on around him. Part of Shibuya station is pretty much a construction site at the moment, so there’s the added chaos that brings. He was just standing there, doing his thing, and I thought again, I do love Tokyo. 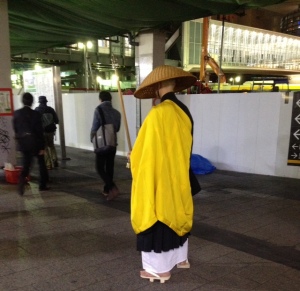