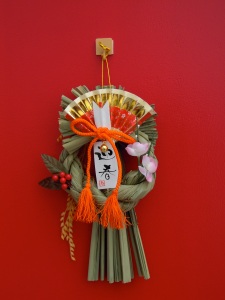 Happy New Year! When I went out this morning the sky was blue and the sun was shining; one of those bright, crisp Tokyo days that make winter here far easier than the grey days of the UK. It was only about 7am, but there were a few people about, and the trains and buses were running on the weekend / holiday timetable. While most people will be off work until January 3rd, there will be a lot of visiting relatives and shrines so we need to be able to get about.

Even so, I was surprised to see so many people out so early. When I transferred onto the Yamanote Line (the overground loop line around Tokyo) it seemed that there were 3 kinds of people; ones with suitcases maybe going skiing or to visit relatives outside Tokyo, ones on their way to a shrine or to visit people in Tokyo (no suitcases!) and the bleary-eyed, bundled-up people who looked like they’d been out all night and were only just on their way home. Now, before you start to think that these are people who have been partying all night, that is not what I mean. At midnight Buddhist temples ring their bells 108 times (because there are 108 kinds of sins) and sometimes people in Tokyo travel down to Kamakura or maybe out to Narita-san in Chiba, or another temple they like, and see the New Year in there. I think if you get there early enough you can sign up to ring the bell for one of those 108 times. Anyway, there can be quite a crush at the temples, shrines and stations, and so it can take time to get home.

The shrines and temples of Japan will be busy paces over the next few days, while people observe Hatsumode (初詣). This is the first shrine visit of the year, which most people will try to do over the next 3 days since they are not at work, but I believe can be done in the first eight days of the new year. It is strictly the first (Shinto) shrine visit, but some people will visit a Buddhist temple instead. The most popular shrine in Tokyo is Meiji Jingu (明治神宮), which I wrote about before (https://tokyopurplegirl.com/2012/12/05/peace-in-the-heart-of-tokyo/) and which millions will visit over the next few days; in Chiba Narita-san is popular, and in Kawasaki the place to be is Kawasaki Daishi, which I went to one year and can confirm it is indeed extremely crowded. As well as praying, it’s customary to buy a new lucky charm or amulet and get a piece of paper with your fortune written on it. If you like what you get (there are different levels of luck) you take it home with you; if you don’t, you tie it to the branch of a tree in the shrine precincts and leave it there, probably getting another one at another shrine and so on until you get one that suits; a kind of holy fortune-shopping, I suppose.

Another shrine-related activity for New Year is a Seven Lucky Gods pilgrimage. Every part of Tokyo has at least one; Shinagawa has 2. I’m going to do one in Meguro on Saturday and will blog about it then, but on my way home I met a couple (he was Japanese, she was American) in the middle of the local pilgrimage, trying to find their way to the next shrine on the map. They had stopped 3 passing youths but didn’t seem to be getting anywhere, so I stopped to help too. She rolled her eyes and said ‘he doesn’t know how to read a map’ (a failing with which I sympathise completely). Luckily, I didn’t need to read the map, I just needed to see that they were doing the pilgrimage and on their way to the shrine near my local supermarket, so I was able to give directions.

I didn’t see many shops open (except for convenience stores), but my local flower shop was open. There is a very large hospital just across the road, and maybe they thought people visiting relatives in hospital would stop to buy flowers, but that doesn’t explain the vast array of plants also on sale, since that is a most inappropriate gift for someone in hospital; you wouldn’t want them to take root there like the plant has done in its pot.

The local wagashiya (和菓子屋) or Japanese confectionary store was closed, of course, but already had fukubukuro (福袋) or lucky bags displayed in the window:

Most stores will be selling them over the holiday period; you buy a bag of unspecified goodies (in this case for ¥1,260, which is £9 or $14.50) and take your chances. Even clothes shops sell them; you buy according to size but know nothing else. The contents are worth more than the price you pay (otherwise they would be very unlucky bags indeed) but some can be expensive; ¥10,000 is not unusual, and that would be over £70 or $115.

While Christmas has become a new Japanese tradition, what all Japanese children and young people were looking forward to today was the otoshidama (お年玉); small envelopes with money inside. Along with New Year cards there is a dazzling variety of designs available in December. I bought these (for research only!):

Since we are now in the Year of the Snake (at least according to Japan, China will wait for the Lunar New Year, this year falling on February 10th), you can see there is a rather appealing snake on top of Mt. Fuji. Japanese people are traditionally avid savers, and this is a habit learnt early in life. The money received in these envelopes will ideally be saved; in reality I think by their teenage years a more realistic goal would be to save half and spend half (on lucky bags)!

I hope the Year of the Snake will be a good one for all of us; I wish you peace, joy and love in the year ahead.